Blog
You are here: Home / Blog / Uncategorized / Shapeshifting – Creation of The Bookworm Cinemagraph 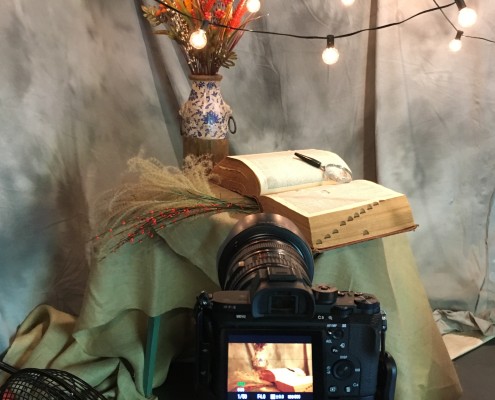 Behind the scene prep

Shapeshifting – On the surface it may seem to be a simple task – like animating the ocean waves or blowing hair – but when planning out a cinemagraph, you may find that what you plan and what you end up with morph many times in the process.

SetUp – Take ‘The Bookworm’ for instance. The scene was set for a different cinemagraph idea but while gathering props, I noticed Sherman’s rustic dictionary tucked away in a corner and thought it would be cool to add this to the set. A few more props picked up around the house – spectacles, journal, pen, and magnifying glass – and the set had morphed again. After a few more adjustments and a fan added for movement, the camera rolled.

Sherman caught me trying to balance the books – a herculean task I might add – and captured me with his Sony A7RII. We decided to turn it into a cinemagraph. I guess I look like the proverbial bookworm! Click on the image to view cinemagraph.

The Outcome – It’s never quite as simple as expected. We added a clever caption and voila – The Bookworm was born!

Want to join the discussion?
Feel free to contribute!