Blog
You are here: Home / Blog / Photography / Mysteries of the Mysterious 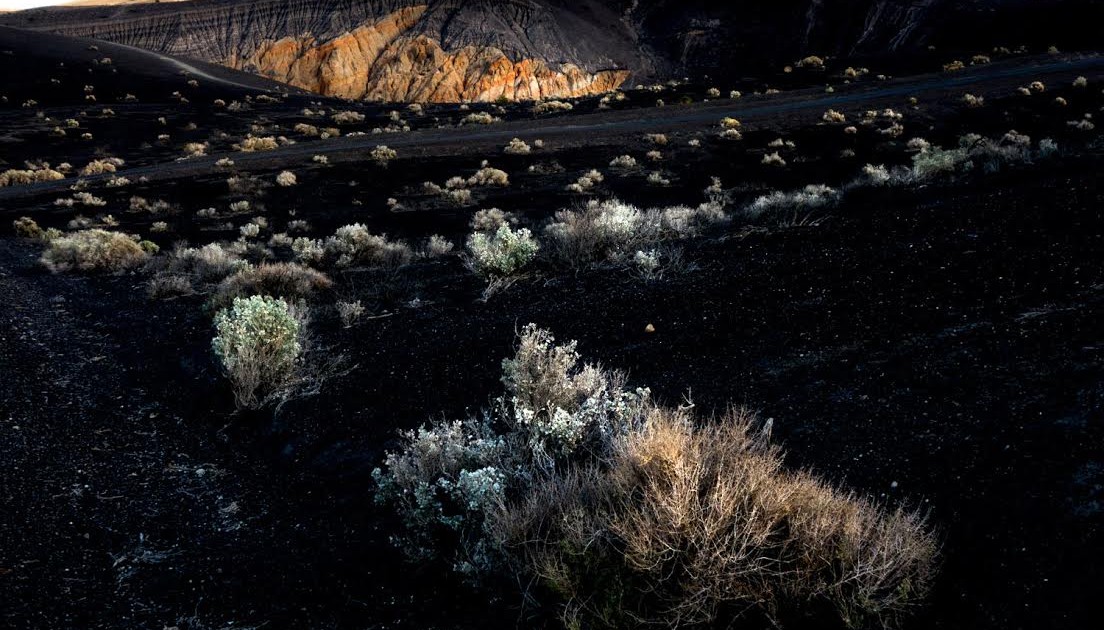 After laying low from the 104 degree midday heat – it was an unusual heat wave for Death Valley in early April – we decided to head North to Scotty’s Castle around 4. Unbeknownst to us the Castle was closed and as we arrived, the guard was locking the gate. We sat for a while trying to decide whether to risk the ride to the mysterious Racetrack in our rented Chevy SUV, but it would be another couple of hours to drive the 26 miles in and we had no cans of fix-a-flat with us. We were advised earlier that morning by an old-timer to make sure we had a 4-wheel drive jeep and plenty of cans of fix-a-flat before heading down Racetrack Valley Road.

We opted for Ubehebe Crater instead. Although the crater was on our radar, it was not in our plans, but it was only a few miles uphill from the Castle. Within three miles of the crater turnoff, there was a dramatic change to the terrain. The earth turned black spotted with light grey sage brush. It was definitely strange looking and as we circled around the crater climbing higher, the landscape became more desolate and surreal. Our timing couldn’t have been better. It was prime golden hour with the clouds shaping up for what turned out to be a spectacular sunset.

As we explored the terrain on foot, we were just awestruck by the jaw-dropping, desolate beauty of our surroundings. The few visitors we encountered were packing up to leave and we found ourselves being the only two souls up at the crater. Or so we thought. As the sun dipped behind the peaks, a young man came upon us out of the semi-darkness after having just finished walking the perimeter of the crater. He was an intrepid traveler exploring the country on his motorcycle before heading east for a summer gig. He regaled us with stories of his adventure on the road solo, sleeping in a hammock hung between his motorcycle and any available tree trunk. He was filled with salt and grit from his time on the road and embodied the spirit of the crater with a twinkle in his eye and a wry grin. After a engaging conversation, he bade us farewell and headed off into the night. As it turned out, it wouldn’t be our only encounter with this lone traveler.

With darkness upon us, the wind kicked up and the stars emerged. The gusts were swirling all around us so much so that we had to anchor our tripod and chairs to our vehicle’s bumper. Using the SUV as a barrier, we decided to stay until the moon rose, about 3 hours later. The sunset was humbling. The Milky Way was even more humbling. The wind was intimidating and, in typical Southwest fashion, speaking to us – this time in a low roar. It made the atmosphere, the aloneness, and the blackness all the more mysterious – even a little unnerving.

We headed south through the moonlit darkness back to Stovepipe Wells with the intensity of the experience still reverberating through us. Hours later, over a very late meal, we silently contemplated the mysteries of the heavens and our relationship to it.

Want to join the discussion?
Feel free to contribute!